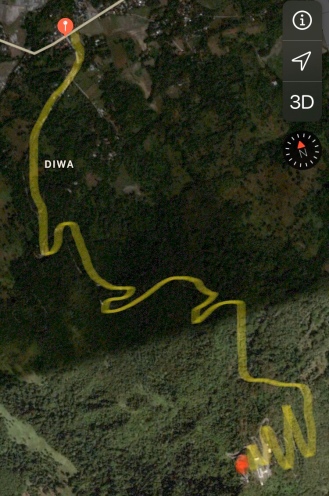 On the 24th March of 2017, I got the chance to go to Mt. Samat National Shrine when my sister’s friend invited us to stay in their home in Bataan. But never expect that we would be walking from the main road (Gen. J.J Linao National Highway) through the Mt. Samat National Shrine. It’s a 6.5 kilometer drive up to Mt. Samat with steep zig zag road, but it took us 3 hours to get to Mt. Samat as we were only walking. Every drivers that have passed by to us were keep on cheering on us and when we got to the top, they were at the entrance of the complex and they were congratulating us as if we won a marathon. 😀 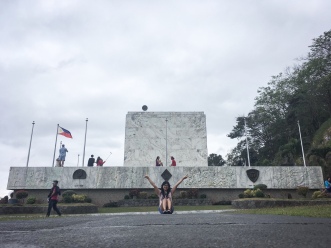 On the Proclamation No. 25 of former President Ferdinand Marcos dated 18th April of  1966, Mt. Samat National Shrine or mainly known as Dambana ng Kagitingan (Shrine of Valor) was established. It is a historical shrine located near in the summit of Mt. Samat in Barangay Diwa, Municipality of Pilar, Bataan. The shrine was built to honor and remember the bravery of the Filipino and American soldiers who fought against Japanese Soldiers during World War II.

The Shrine was designed by Lorenzo del Castillo and was landscaped by Dolly Quimbo-Perez. It was completed and inaugurated in 1970 during the 25th anniversary of the end of World War II.

The complex is open to public but with entrance fee of PhP 50.00 per person, it mainly features the Colonnade and the Memorial cross.

The colonnade has an inside altar which has an ornate stained-glass backdrop designed by Cenon Rivera and made by Vetrate D’arte Giuliani. It also showcase the sculptural inscriptions and murals of the Battle of Bataan by National Artist Napoleon Abueva, the bronze insignias of USAFFE Division Units by Talleres de Maximo Vicente, Leonides Valdez, and Angel Sampra and Sons.

Behind the Colonnade, there is a path that leads to the giant Memorial Cross that is made of marble, concrete and steel. The height of the Cross is 95 meters from the ground (312 ft) and the arms measures 30 meters (98ft) each side. It has an elevator and at the top of the cross you will be welcomed by the panoramic view of Bataan, Corregidor Island and Metro Manila situated about 50 km across Manila Bay.

Unfortunately, we were unable to go up the Memorial Cross as it is under maintenance that day.

The exterior of the Memorial Cross depicts the significant battles and historical events during the World War II.

On April 6, 1961, the Philippine Congress passed the Republic Act 3022 declaring April 9 of every year as “Bataan Day”, a national holiday to commemorates the fall of Bataan during World War II.  In 2010, Presidential proclamation no. 84 again revised the holidays, referring to the April 9 holiday as “Araw ng Kagitingan” also known as the “Day of Valor”.

There are other interesting places in Bataan, but we only have a day to explore before we go back to Manila. Anyway, there’s still next time.

2 thoughts on “A Long Road to Mt. Samat”